“Is this your first river cruise?” This question was asked repeatedly on our shipboard journey along the Danube. Hungary, Croatia, Serbia, Bulgaria, and Romania were on the itinerary. My husband and I were traveling alone, unlike many of our fellow cruisers who’d embarked with family and friends. The voices on the ship reflected various regional accents, many from the southern part of the United States, some from the mid-west, more than a few from Canada and Australia. We encountered very few New Yorkers, like ourselves.

“Yes, this is our first time,” we answered, and we were pronounced virgins. Apparently, for some, a cruise vacation is equivalent to sex.

I found it more like being a beloved infant. I discovered that I could cope very well with having my bathroom cleaned, my bed made, and my hunger assuaged on demand. For the diet conscious, a selection of healthy food was always available and always delicious. Especially when followed by soft serve ice-cream at the ready all day and all night. For the rest of us, there was bacon and eggs (an omelet if you wanted it) for breakfast, along with fresh fruit, creamy yogurt, five different kinds of cereal. Brown bread and rich butter. Hot food and a cold buffet at lunch and dinner. Nothing too exotic. Familiar cuisine. All the wine you could drink- red or white. Or both.

Seats were unassigned. At first it was a little like being in high school again, wondering which table to join. But luckily, we met congenial companions, two other couples, and our shared meals were very pleasant, sailing smoothly along on the not-so-blue Danube, (the water was actually green and brown) and losing all resistance to desserts. For that one week aboard the ship we were pampered like the lords and ladies of Downton Abbey. But, as in Downton, there were those who lived below stairs. Or below deck, perhaps.

The waiters and attendants were mostly from the Philippines. They worked tirelessly to fulfil our every demand, bringing one guest two dinners every night when he couldn’t decide between the options, catering to another woman’s need to have a customized side dish with every meal. When questioned, the staff cheerfully admitted that they would not see their families for months, but simply stayed on the ship most of the year. We were pampered like the lords and ladies of Downton Abbey, but I began to feel more in tune with Anna the housemaid than with Lady Mary.

When we left the ship at certain ports of call, we were treated to special exhibits put on for our benefit, folk dancing, youth chorales, and, most notably, a horse show where riders could handle four horses at once. An eight-year old boy was one of the riders, dressed in native costume, skillfully demonstrating the rituals of his ancestors under the direction of his father. On walking tours we carried portable transmitters to hear the guide’s commentary, shuffling along together like preschoolers holding onto a rope. On bus tours off the ship, the drivers offered history lessons about ancient wars between long ago princes. Some of our fellow riders slept through these but awoke quickly when we disembarked at shops. So many things for sale were shoddy, even pathetic.

Misshapen crocheted doilies in shades of red and brown. Plastic toys which looked as they’d break on contact. Children, lurking behind parents and grandparents, were pushed forward to translate, speaking in perfect English. What did they think of us, these children, wealthy old people, many overweight, speaking only English, snapping up flimsy doodads.

“Where are you going next?” someone asked at journey’s end. It seemed that many “regulars” on these cruises lived from trip to trip, eating familiar foods, thinking familiar thoughts. Circling the globe like goldfish in a very large bowl. My husband and I did not want to join this circuit.

We had been Cruise Virgins. But for us the experience would be a one-night stand. 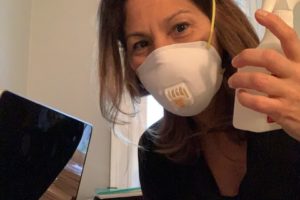 I walk the streets of my neighborhood. I see spring[...]