The Train to Warsaw

Last week, I almost set off fireworks to celebrate the Literature Nobel Prize for the writer Olga Tokarczuk. A dear friend introduced me to her book “Flights” months ago. Since then, I’ve been talking about “Flights” to everyone. When I read Olga’s stories I also see Poland, her native land and the scenario of “Drive your Plow Over the Bones of the Dead”, another of her novels that’s occupying my nightstand at the moment. It’s been impossible not to remember a single trip I made to Poland many years ago, my old little travel adventures slowly popping up from some hidden brain compartment. I had to dedicate this week’s story to the train journey that took me there.

In a cold winter in the early 90’s I decided to take a trip to Eastern Europe, a unique chance to see ex-Communist countries before the non-looking-back transformation they would go through very fast. I spent a few days in Berlin, crossing the city from West to East to photograph shiny Mercedes-Benz parked side by side with battered Trabants. Then I took a night train to Warsaw. In the small hours, the train stopped in Poznan, a city halfway between the German and the Polish capitals. All I remember from Poznan is the view from the train, a somber station, where my Polish travel companion got off and I never saw her again.

She boarded the train in Berlin. I had already taken my window seat when I saw her on the platform, saying goodbye to a very tall man. He wore an elegant long coat and leather gloves that looked expensive. His shoes were sparkling, an unusual sight in snowy Northern winters. She wore a plain beige skirt, a short jacket and heavy snow boots that had nothing to do with the outfit. Her knees were uncovered, exposed to the freezing temperature.  He let her go, but she couldn’t stop crying. I was surprised, almost embarrassed, when she boarded the train, because her designated place was right in front of me. The train was old, with uncomfortable narrow seats too close to each other, all in shades of army green, living testaments of a recent past just about to be erased.

The man didn’t wait for the train to leave, but in a glimpse I could see he was crying too. Before we started moving, he turned on his heels and left, his black coat disappearing in the crowd. I noticed her uncovered knees in front of me, reddish and very dry.  She was a pale woman, with short blonde hair framing a fairy face.

I wondered if she was going to cry through the whole trip. Should I say something? But as soon as the train started to move, getting closer and closer to the

Polish border, her expression changed. After a while, she said a few words in a language I couldn’t understand.  Then she tried something different:

Years ago, I was less conscious about privacy and simply asked the personal question I would never ask today in a similar situation:

“Why were you crying?”

“I left someone in Germany. I thought I wouldn’t bear being far from him, but now that I get closer and closer to my Poland, I feel a little different. There’s a comfort here that I haven’t felt for a long time. ”

She said nothing more and finally produced a smile. We arrived in Poznan in silence. She got up, wished me luck and disappeared in the station, renewed.

At that point, I still didn’t understand the feeling of going back home, part of the multiple layers of a life in exile. I never forgot my travel companion and never asked her name. Now, years later, Olga Tokarczuk brings me back to Poland and to this cold night in a train. Last week, in the absence of fireworks in my quiet neighborhood, I just lighted candles and baked a strawberry cake. 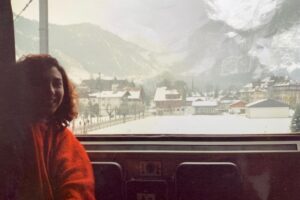 We sat around a small table on the train to[...] 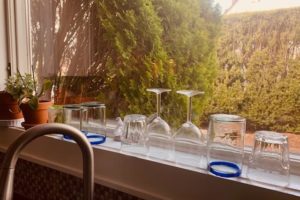 It’s a Lovely Day (with Bill Withers in the kitchen)

On the first week of confinement, our dishwasher went silent,[...] 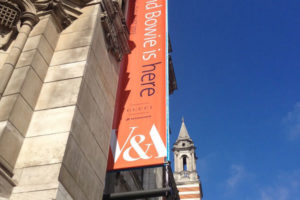 July, 2013. I was in Thomastown, Ireland, a tiny quiet village where my in-laws live. David Bowie Is, the exhibit recounting all Bowie’s life and career, was drawing crowds in London beyond the million marks. One morning I was taking a walk in the countryside, Aladin...