Nowadays, this story would never be possible, but it happened more than twenty years ago, when we didn’t have cell phones. Before texting and social media, miscommunication and missed encounters were common and these little tragedies where the germ for great stories. Can you imagine the movie “An Affair to Remember” with cell phones? In the story, the characters played by Cary Grant and Deborah Kerr plan a reunion in six months time on the top of the Empire State Building, a proof that they would still be in love with each other. But a car hits the girl on her way to the meeting, and the whole conflict of the story comes from that misfortune. These dramas were part of a more romantic and unpredictable world that has been changing (and don’t get me wrong, of course I can’t live without my cell phone now).

Many years ago, Milan was the scene of a goodbye moment that never happened. After years of a long distance relationship, things were hitting a wall between E and me. Coincidentally, we would be both in Milan for a couple of days in the end of the summer.  We decided to meet with a little anxiety and uncertainty about the future. For two days we had countless Aperol Spritz around the Duomo, walked Via Garibaldi up and down, stopping at Radetzky for a bite at night and a cappuccino in the morning. We were pouring over a city the last drops of a relationship that wouldn’t go anywhere.

Despite the summer atmosphere, Milan was grey and foggy in our last day, before we would fly in opposite directions and to separate destinies. Milan is the type of city that gets more fascinating with the darkness. We were conformed and decided not to do our last shopping errands together before going to the airport. We would meet at 12 o’clock in front of Alessandro Manzoni’s house to have a last cappuccino, celebrating our new friendship.

Despite a nervous anticipation, I bought a jacket, a handbag on sale and a few gifts. I went to three different bookshops, but didn’t realize I had gone too far. At 11:50, I started to walk back. I was far from the subway and researching for the right tramline would take me longer. So I walked faster, hurrying by rows of fake handbag sellers, who displayed them on the ground, along the sidewalks.

I looked at my watch. 12:15. 12:20. I was sweating and my shopping bags were getting heavier by the minute. At 12:30 I reached La Scalla, close to Via Alessandro Manzoni. I got there almost breathless, but no one was waiting.

“Damn it. He thinks I’m running away.”

I waited until 12:50 and decided to go to his hotel. It was close to San Babila, a 15 -minute walk. When I got there and asked, no news. I walked back to my hotel in the opposite side of the city, passing by the Duomo, feeling small and powerless under its marble towers and La Madonnina, the golden Virgin on the top, close to the sky.

When I reached my place, it was time to go to the airport. There was a little note at the reception:

Sorry we missed each other, I walked from my hotel to yours, but it was not meant to be.

I don’t believe our destinies would have changed – like in Cary Grant’s movie – if we could locate each other every minute, but certainly the drama and tension of those moments of search wouldn’t exist. They just make this story worth telling. 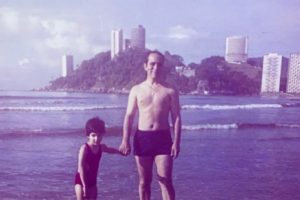 I look at Jupiter 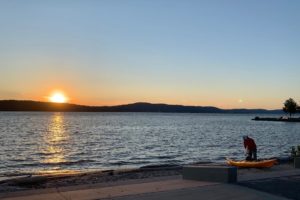 The Train by the Hudson (Hudson River, NY)